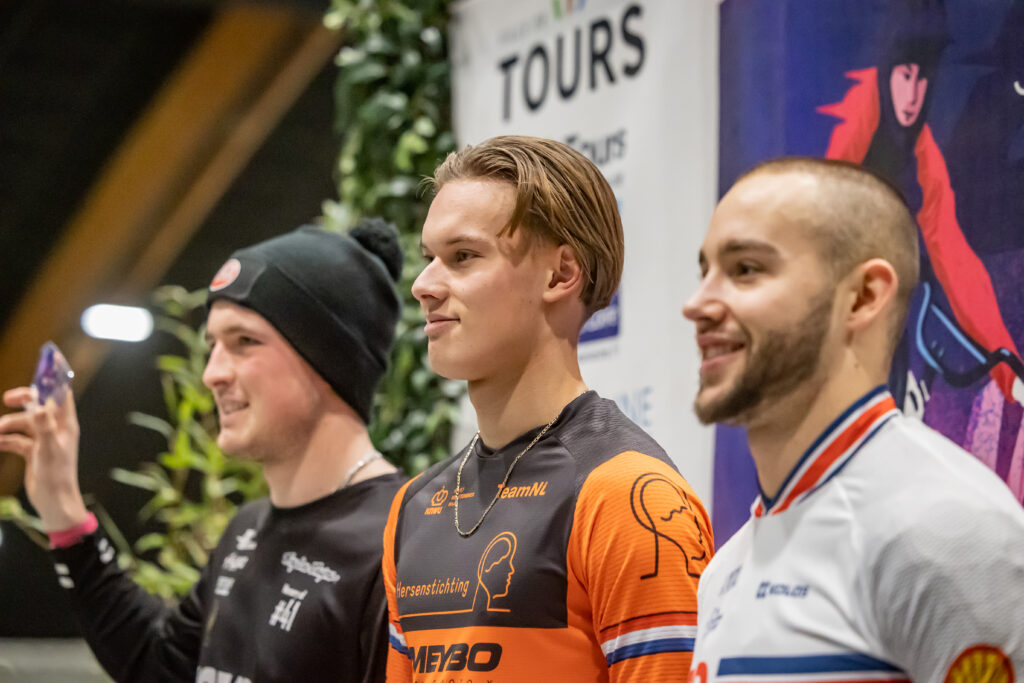 Congrats Jaymio, on the big win at Tours over the weekend in France. I believe this is not only just your first Elite win but also maybe even your first weekend in the Elite class?
Thanks Dale! Yes this is my first weekend as an Elite Men’s rider. So that makes the win even more special for me. Last year Junior men, now straight to the Elite men.

I’m sure your dad has told you the long history of the Tours race that goes back to the 80s and the list of names that have won the race over the decades, you must be very pleased with the win.
Yes of course! My mom and dad always talk about Tours. They always told me about how big the event was with the show and the people. So I was really curious how it was. I was at Tours when I was 2 years old, but I couldn’t remember anything haha. I rode there with my mini BMX bike.

How did the rest of the weekend go, were you feeling confident going in?
The rest of the weekend wasn’t that great. I was really struggling with myself. The gate was slower so I was making weird movements out of the gate. It was my first Elite race so it’s always different. I think you have to get used to it, so I was struggling a lot. On Sunday I came in third every round. But I was staying positive, top four is enough for the next round. I was happy to be in the final. So when I went up to the gate I was really relaxed. No pressure, just fun. Every round that weekend I was overthinking and struggling. Except for that final. I let it come to me.

Let’s jump back a few years to both of your parents being involved in BMX. Your dad Dorus is a multi-time National, European, and World Champion. It only made sense you’d get into BMX and follow in his footsteps.
Yes, since I was a kid I grew up with BMX. My mom and dad used to race. Even my grandparents are involved in BMX. So my whole family was involved. When I was three years old I went with my mom and dad to the track. And when I was four I was racing my first races. I never played any other sports. It always was BMX. Behind our backyard my dad built some small BMX jumps. I was there everyday playing around. The jumps were getting bigger and bigger haha. So I could challenge myself all day.

Give us a little rundown of your amateur career before you hit the Junior class.
My amateur career was quite good. When I was eight years old I made my first World Championship final. I got third. Nine I became European Champion. Ten – I became Dutch Champion.

The next year when I was 13 I was really small. I wasn’t strong and could’t keep up with the rest of the World in my class. They were bigger and stronger so I had to race in between everyone. The year when I turned 15, I was a bit faster and was growing. When I look back at the years when I was small it was good practice to learn how to race in the pack. I became Dutch Champion when I was 15 and 16. And second in Europe that same year. I felt I was getting better and prepared for the Junior class.

Last year you came 2nd place at the World Championships in Junior. How did that feel? Were you happy with the result and what are your thoughts on coming so close to becoming World Champion?
I won all day so I knew I could win it. It’s BMX so everyone can win, it’s just that final lap you have to do well.

Of course I wanted to win it. I wasn’t that happy when I crossed the finish line. And I know second at the Worlds is also really good but I was so close to the win. So it’s a different feeling for me. Now I’m happier with it after reflecting but the dream stays, to be a World Champion.

How much does dad play a role in your BMX with Coaching and advice?  It must be a huge advantage having him in your corner?
My dad brought me here where I am now. He plays a really big role in my life and in my BMX career. He coached me all his life until I joined the Dutch team. In the beginning it was quite hard for us both because I was still asking questions and saw him as my coach. But now we are more than a year further and we can both combine it well.  He has always been in my corner and he will always give me advice if I need it.  That is my secret advantage.

Who are some of the riders you look up to and like to watch?
I think Sam Willoughby is one of my favourite BMX riders, ever. I liked his style and the aggression and power he puts in every pedal. I also look up to Maris Strombergs. I always liked to watch him race.

What’s your schedule looking like for 2023?
It’s my first Elite year so I’m racing Elite every race. Going to all the supercross races and all the European Cups.  I plan to ride some French National races along with the Dutch, European and the World Championships. Hopefully, we will go to the Grands at the end of the year.