After four rounds in Europe, the UCI BMX Racing World Cup tour headed to Bogota, Colombia for back-to-back weekends of top-class action from the best riders in the world.

Round 5 saw the U23 Women without the top three riders in the standings; Molly Simpson (CAN) and Thalya Burford (SUI) were riding their first WC races as Elite Women and World Champion Malene Sorensen (Den) was out through injury. Emily Hutt (GBR) has been so close to making a final this year, and in R5 she would make the breakthrough. Hutt looked comfortable all day, taking 2nd places in her moto, quarter, and semi to transfer to the main. McKenzie Gayheart (USA), who was unlucky not to make the Worlds final in July, was also on a mission, winning her moto and quarter. In her semi, Gayheart got the holeshot, leading through the first turn. A little case on a jump halfway down the second straight allowed Veronika Sturiska (LAT) to close in, and eventually make the pass down the third straight, where she held on for the win, with Gayheart taking second.

In the final, Hutt and Gayheart both got great gates, but they were both left chasing an unstoppable Sturiska, who hadn’t dropped a lap all day. Sturiska pulled away to take the win in convincing fashion, Gayheart in second, and Hutt in third.

In U23 Men, Rico Bearman (NZL) and World Champion Leo Garoyan (FRA) looked comfortable through qualifying to see them safely into the main. Hugo Marszalek (FRA) eased through the first round and his 1/8 final, but found things tougher in his quarter and semi, taking 4th and 3rd place respectively, to see him into his fourth main of the series. Cristhian Castro (ECU), after picking up a 2nd place in the first round, took 4 th place finishes to scrape through his 1/8, quarter and semi-finals, to somehow find himself in his first World Cup main of the year.

When the gate dropped in the main, it was Garoyan who got the snap from Lane 1, and took the lead into turn one. On his tail was Bearman, but coming in low on the inside was Castro who pushed Bearman high, allowing Castro to slip into second, and opening the door to Marszalek who took up third. Nobody was catching Garoyan, who took his third World Cup win in a row, Castro just holding onto second from Marszalek, with Bearman fourth. Castro picked up his best results of his 2021 World Cup campaign in Bogota (2nd and 3rd) so, with the final four rounds at this track, could he turn his 2022 season round, after a disappointing first half?

Elite Women saw the return of Alise Willoughby (USA) and she looked to have lost none of the speed and skill she is known for. In round 1 she took a second place to Mariana Pajon (COL). They would swap those places when they met again in the quarter final. Willoughby took another win in her semi to see her ease into the main. Laura Smulders (NED) made it to the main without losing a lap. Olympic and European Champion Bethany Shriever (GBR) also looked good, taking wins until settling for second to Laura Smulders in their semi. Winner of Rounds 3 and 4 at Papendal, Zoe Claessens (SUI) took wins in her first-round moto and her quarter, but it was in her semi-final that Claessens’ day would end, getting a little bit out of shape over the first jump, pushing her to the back of the pack, unable to make up any places.

In the final it was Shriever who would turn on the power as she took the lead into the first turn, ahead of Laura Smulders and Willoughby, with Lauren Reynolds (AUD) tucked in behind them. Laura Smulders looked to be gaining ground down the third straight, but couldn’t quite catch Shriever who took the win, Willoughby in third, Reynolds in fourth.

The quarter finals saw Joris Daudet looking good, taking a convincing win. In his quarter final, European Champion Kye Whyte got a bad gate and was at the back of the pack into turn one. Using his famous track speed to good effect, Whyte worked his way up to fourth place by turn two, making up another place down the third straight to transfer to the semis. Niek Kimmann (NED) and Cedric Butti (SUI) both taking wins in their quarters. In the first of the semis, Kye Whyte got a great start and took the lead out of turn one along with the win, followed home by Niek Kimmann, Sylvain Andre in third, and Miguel Calixto Lopez (COL) working his way into fourth. Daudet got caught up in traffic and found himself in last place down the second straight, and his day was done. The second semi saw Butti and Bruno Andrade (BRA) crash out in the first turn, with Carlos Ramirez (COL) and Mathijn Bogaert (BEL) also involved. The carnage allowed Cameron Wood (UDA) to stretch out a sizeable lead over Alfredo Campo (ECU), Michael Bias (NZL) and Eddy Clerte (FRA) who all transferred to the main.

In the final, it was Kimmann who used his power to take the lead out of turn one, closely followed by Wood. Whyte, again getting a poor gate and giving himself a lot of work to do, gave another display of stunning track speed, turning on the turbo boost to shoot his way up to third place by the end of the third straight. Andre was on the inside entering the final turn though, and was able to push Whyte back to fourth. It finished with Kimmann taking the win, looking like he’d never been away, Wood in second, Andre in third and Whyte fourth.

In the first of their semis, Emily Hutt (GBR) unclipped out the gate while Veronika Sturiska (LAT) took a comfortable win. Two riders went down on second straight taking Hutt with them, and any hope Hutt had of working her way back into a qualifying spot. In the second semi, Mckenzie Gayheart got a good gate from the inside, and took the lead into turn one, Leila Walker (NZL) in second. Down the last straight it a fight between three riders for the remaining two qualifying places. It was Kanami Tanno (JPN) who lost out as Francesca Cingolani (ITA) and Sharid Fayed (COL) went through.

When the gate dropped in the final, it was Sturiska from gate 1 who got the holeshot, dominating the race to take another convincing win. Gayheart took another second-place finish, unable to close in on Sturiska. Coming out of turn one, Fayed went wide and looked to take off from the doubles on the pro straight. Fayed went on to finish third but ended up being relegated to eighth place, Aiko Gommers (BEL) and Cingolani promoted to third and fourth respectively. In the overall standings, Sturiska and Gommers move ahead of Malene Sorensen and Molly Simpson, and it’s likely that Thalya Burford’s lead will go at the next round too.

Cristhian Castro (ECU) couldn’t repeat his heroics from R5, and went out in the quarters. Asuma Nakai (JPN) was looking strong and in the first semi he got the holeshot and the win, with Mauricio Molina (CHI) coming home in second. In turn 1, Jersy Andrade (COL) tried to push Jason Noordam (NED) high but ended up taking them both out. In the second semi it was Rico Bearman with the holeshot, and he didn’t look back, Dylan Gobert (FRA) following him across the line in second. World Champion Leo Garoyan (FRA) didn’t get a good start and found himself boxed in and back in fifth place, having to dive for the line and a photo finish with Juanpablo Chapparo (COL), Garoyan just scraping through to the main.

In the final, Nakai got another great gate, to lead the pack out of turn 1, followed by Molina, and Tatyan Lui Hin Tsan (FRA) in third. Into turn two and it was Molina making moves, diving inside and pushing Nakai up the berm to take over the lead. Nakai was out of shape, allowing Lui Hin Tsan to make a challenge on the lead. Molina was able to hold him off for Chile’s first ever World Cup win, Colsenet taking third, Bearman having to settle for another fourth, and Garoyan back in seventh, Gobert in eighth. In the overall standings, Garoyan leads Gobert, but today’s second place finish helps Lui Hin Tsan leapfrog Bearman into third.

In the quarters it was Olympic and European Champion Bethany Shriever (GBR), Laura Smulders (NED), Mariana Pajon (COL) and Zoe Claessens (SUI) taking the wins. In the first of the semi-finals, Laura Smulders powered to victory ahead of Alise Willoughby (USA), with Pajon in third, Lauren Reynolds (AUS) in fourth. In the second semi-final, Shriever and Claessens were neck and neck down the first straight, but it was Shriever who exited turn one in the lead, Claessens holding second. That’s how they crossed the line, with Manon Veenstra (NED) and Gabriela Bolle (COL) also going through to the main. Molly Simpson (CAN) and Thalya Burford (SUI) were both unlucky to go out in their semis today, Burford also making the semi on Saturday, but it was a really good Elite debut from both riders.

In the final, Laura Smulders gets the snap from lane 2. Beside her in lane 3, Shriever doesn’t get the best of starts and quickly finds herself at the back of the pack. Willoughby tucks in behind Smulders out of the first turn, Reynolds making her way up to third, with Claessons in fourth. That’s how they cross the line, with Smulders taking yet another World Cup win to extend her lead in the overall standings, ahead of Claessens and Shriever.

In the first quarter final, Joris Daudet ran away with it, Cameron Wood (USA) seemingly miles behind in second. In quarter final number two, Sylvan Andre (FRA) got the holeshot, taking the lead into turn one. Alfredo Campo (ECU) caught the back of Andre’s bike and unclipped, taking himself and three other riders out. Andre would take the win ahead of Arthur Pilard (FRA). Quarter number three saw Diego Arboleda (COL) take the lead into turn one, ahead of Niek Kimmann (NED) who was powering across from lane 8, but Izaac Kennedy (AUS) held the inside line round turn 1 and slotted into second place. It finished Arboleda, Kennedy, Kimmann. In the last quarter final, Jeremy Rencurel (FRA) took the win from the gate. European Champion Kye Whyte got a good start and looked to be in second place before Nicolas Torres (ARG) overtook him as they entered the second turn, Torres holding onto second and Whyte third. In the first of the semis, Daudet was again unstoppable, Andre settling for second place behind him, Whyte with a third, and Wood fourth. In the second semi, Izaac Kennedy (AUS) took the win ahead of Jeremy Rencurel (FRA), with Torres in third, Arboleda in fourth. Kimmann found himself at the back of the pack out of turn one and couldn’t find a way back, ending his day.

In the final, Daudet again got a great gate, but not as good as Wood, who took the lead into turn one, Daudet in second, Whyte in third. Whyte was coming under pressure from Kennedy down the second straight and ended up going out in turn two, allowing Kennedy to move himself up into second place as they headed down the third straight, with Andre in fourth. Wood holds the lead out the final turn, Daudet has the inside line to dive under Kennedy. Wood heads for the finish line and his first World Cup win, while Daudet and Kennedy have a drag race for second. The photo finish gives it to Daudet, Kennedy in third and Andre in fourth. Wood’s win moves him up to second in the overall standings, behind Mr Consistent, Sylvain Andre. 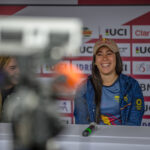 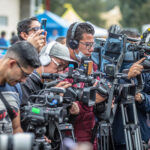 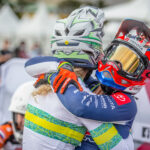 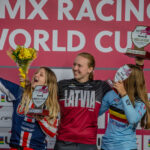 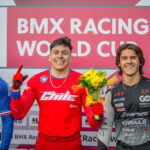 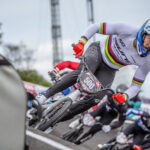