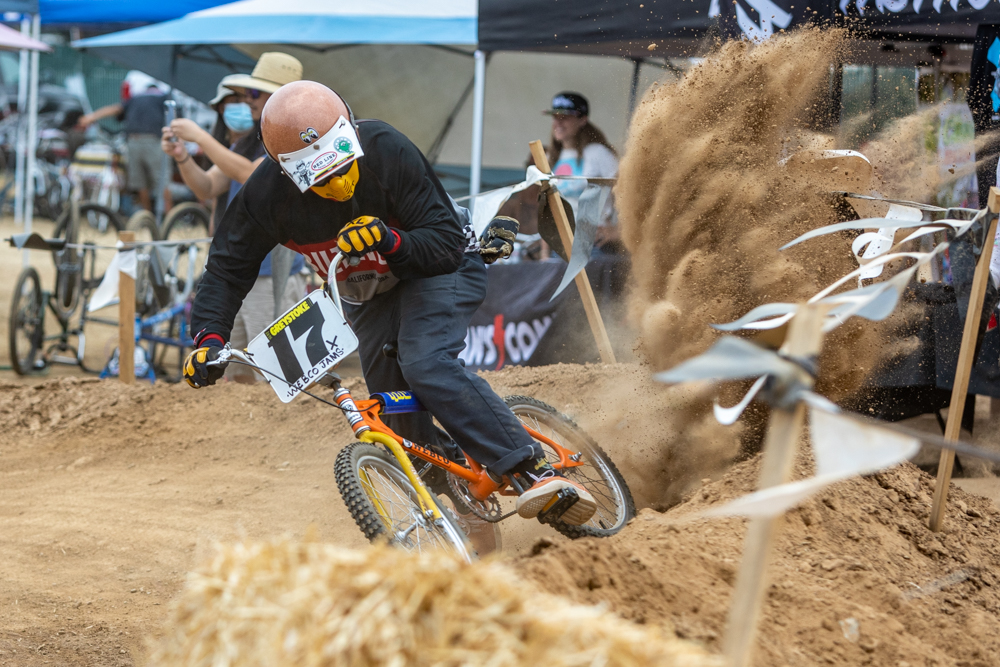 Well, I actually left GT in 1998 after 10 years of being the Director of Marketing there which was really fun because as we all know the 90’s was the decade of “The Firm”. We had a lot going on. Then I did some consulting, athlete agent stuff (was Brian Lopes and Hans Rey’s “agent” for a brief time) and gulp…event promoter…I created and produced for 3 years the “Invert Vertical Sports Carnival” which as a neat idea, ahead of its time, but financial disaster. Then in 2003 I teamed up with Don Hoffman from my GT days (and judge for AFA King of the Skatepark Series) which was held at Don’s family’s “Pipeline Skatepark” and we formed “Pipeline Digital Media” as a TV and video production company which we have been doing since.

With Pipeline we developed a TV series called The Motocross Files for Speed and that put us firmly in the motorcycle industry for years with TV shows, commercials, films, videos, etc.

You’ve been keeping tabs on the BMX industry over the years, what are your thoughts on today’s landscape?

You know it’s tough for me to be so removed for so long then occasionally look at current racing. It’s almost foreign to me as I don’t know the riders, the tracks are weird/scary and heartbreaking that American riders are not the best anymore. I do feel the evolution of the tracks, Olympic/UCI standardization, riding styles, etc. has gotten the racing away from its “motocross roots” and more into a “track meet style” of competition. I spent 2 hours or so last year watching the streaming from the Grands and it was pretty much all the same. Get a good start to get out front and stay smooth over all the rhythm sections jumps, turns, etc. take the right lines to not get passed and you win.

For those behind it seemed to me, all of the above, plus just to stay close to wait for a mistake or some heroic move in the last turn to outsprint/smooth the other guy to the finish line. Don’t get me wrong, watching the Elite Men and Women is fantastic and it broke my heart seeing Connor crash in Japan. Those guys are going real fast, flying real high and the ground is now very, very hard. I do think the Olympic tracks (or any for that matter) don’t need a hill that high for the “thrill”. It’s called pedaling. You know I think BMX is the only Olympic sport that puts eight athletes flying through the air at those heights and speed on asphalt in close proximity. It’s come a long way from my rubber-band starts at Sacramento Raceway in 1976.

How did the idea for Frogtown Classic BMX Days come about?

With all the regional BMX Hall of Fames popping up around the country (and now world 😉) a couple few years ago I was talking with Johnny Valdez who created and operated the UBR (United Bicycle Racers) in Northern California where I raced and won a #1 district plate in 1980 and #2 Pro Plate in 1982, about having a reunion event for UBR racers. One thing led to another and I asked about the old, famous Frogtown downhill track in Angels Camp. He said it’s still there and the fairgrounds uses the hill for overflow parking during the Frog jump and fair. So the idea of a multi-day, vintage or classic race, reunion, bike show and swap meet came about. I asked about who would run the races and John said the Anderson’s who run Spreckels Park in Manteca, a current USA BMX track. Cool, I thought as I used to race against Jon Anderson in 16+X and then as a pro. We asked Jon and his wife Catherine and they said “We’re in too”. And then it was a matter of getting the fairgrounds to approve, putting together a great volunteer staff of ex-UBR racers and their families and wah-lah. Instant cool event! 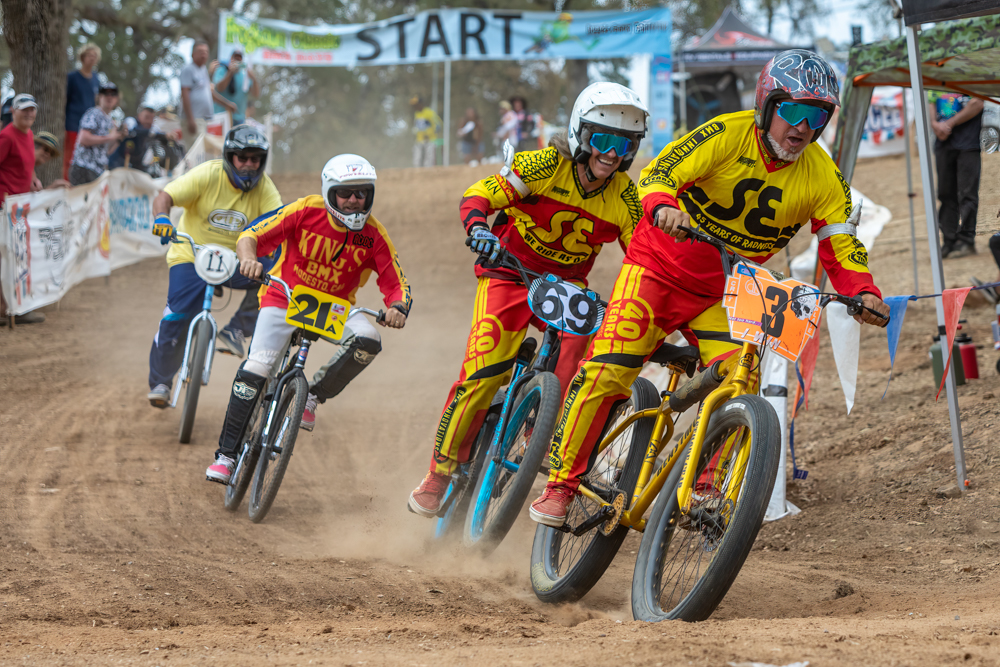 How did year one go?
Really good and not so good. All good on the concept, the track, everything people loved. Old guys loved it, young kids had to learn how to put their foot out in turns (Hah!), seeing the old bikes run again…Even Terry “Mr T” Tenette running the manual starting gate. We had 50 motos, 25 modern and 25 vintage/classic. The not so good was Mother Nature. We saw about 10-14 days out that a freak “atmospheric river” was going to hit the area on Friday of our event, clear up on Saturday and then really pour down on Sunday and for Monday teardown. So we had to cut three days into one but that Saturday was awesome. The sun came out, the track was perfect, fast, tacky, no dust and everyone loved it. I actually like the photos from last year compared to this year in some ways cause the dirt was dark, the filtered light was nice and there wasn’t any dust which sorta washes out pics and make them seem a little over-exposed. We look at 2021 as the dress rehearsal for 2022.

You just wrapped-up what looked like an amazing event in year 2.  Are you happy with the outcome?

For sure. We got to see the fully envisioned 3-day, BMX festival style event with almost double the moto count, more riders in the motos, more legends racing and attending and gates (as in 4-5) of sidehacks! Can you believe that! The weather again leading into the event was brutal with sweltering heat, building the venue out and then some wind that wreaked havoc on our banner plan. It was really hard on our great volunteers and staff to pull this off. We still have some growing pains that we’re getting through on integrating modern racing and the USA BMX system with this completely new and foreign vintage racing and class make-up. But we’ll keep getting better.

In a tough industry now with sponsorship and smaller budgets since your GT days, you still managed to pull off some great backers and partnerships for the event.  Was it tough to sell the industry on your vision for Frogtown?

Yes and no. Some instantly got it that we were doing something completely unique to the BMX space and the industry in the world and wanted to be part of it. Plus, they have products in the retro space world that they need to sell. Others sort of saw it as “another thing” to spend money on that might be more than what they currently spend on things so they wanted to wait and see. I think after the first year word got out that it was really, really, cool and different and we over-delivered on what we offered sponsors so they trusted us for 2022. We only had one sponsor from 2021 who didn’t come back and that was a local, non-endemic company that had recently been purchased. Everyone else came back and of course you saw we added a lot more and will so for 2023. 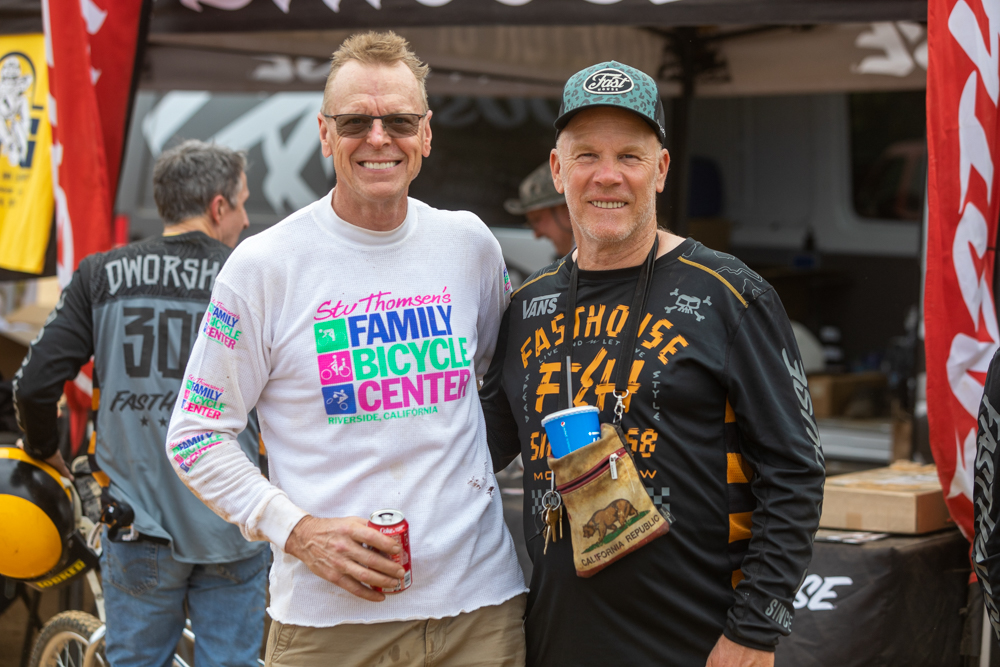 For the ones who might not have seen on social media, who were some of the former legends that showed up?

Watching some of the clips of the racing, I was pleasantly surprised by how fast Stu Thomsen, Toby Henderson, and of course, Terry Tenette were.  Who else impressed you?

Hah! I think some of those guys surprised themselves! It was impressive seeing Stu, Toby and others ride like they did 40 years ago (or it seemed to us wishful spectators) Of course that pro-am main with Mr. T and Jason “Cheeseburger” Morris was very special and opened a lot of eyes and minds of seeing BMX again like that, live on that old school track. But also Brian Dworshak on a 1975 R&R was pretty fast, Bobby Woods was going good and Chris Moeller about had the race of his career on that 1975 Mongoose with motomags railing the entire outside of the flat turn 3 that caused everyone nothing but trouble all weekend sliding out, etc. He and everyone were surprised at the speed and traction he held in that turn going for the win in the Pre-1976 class.

Any other snippets you can share with us that we may not have seen from the weekend?

It was just a great weekend overall. Brent Patterson and his family thew a private party on Saturday night at his beautiful home nearby and invited of course all his legend peers but also our entire volunteer staff and their families which was very special for them, most of who back in the day were just local racers and fans of all these guys they saw in the magazines, etc. To be at a private party with all these legends was just great for them. Also, seeing and hearing from the skeptics that said at the end, “We’ll be back in 2023!”
And finally, the story of my old friends the Croffoot Brothers, Chuck and Kelly who were the NBA and UBR sidehack champs in 1980 and 1981. They put a hack together, had custom uniforms made and were super excited to race again after all these years. Well, in practice on Saturday they crashed and Chuck broke a vertebrae in his back. His brother Kelly, who is normally the monkey on the hack, was going to throw in the towel. But he called his son Ryan over and hour away to come take Chuck’s place. Now Ryan who has never raced BMX, never been on the hack and didn’t get one lap of practice was now the Monkey as Kelly was now the pilot. The go on and win the entire race! Cinderella story.

I saw last month a similar type of event happened in France, which looked cool.  Your thoughts on the French version?  I’m sure people in the UK who love this kind of BMX are already seeing how this event could work in the UK also. 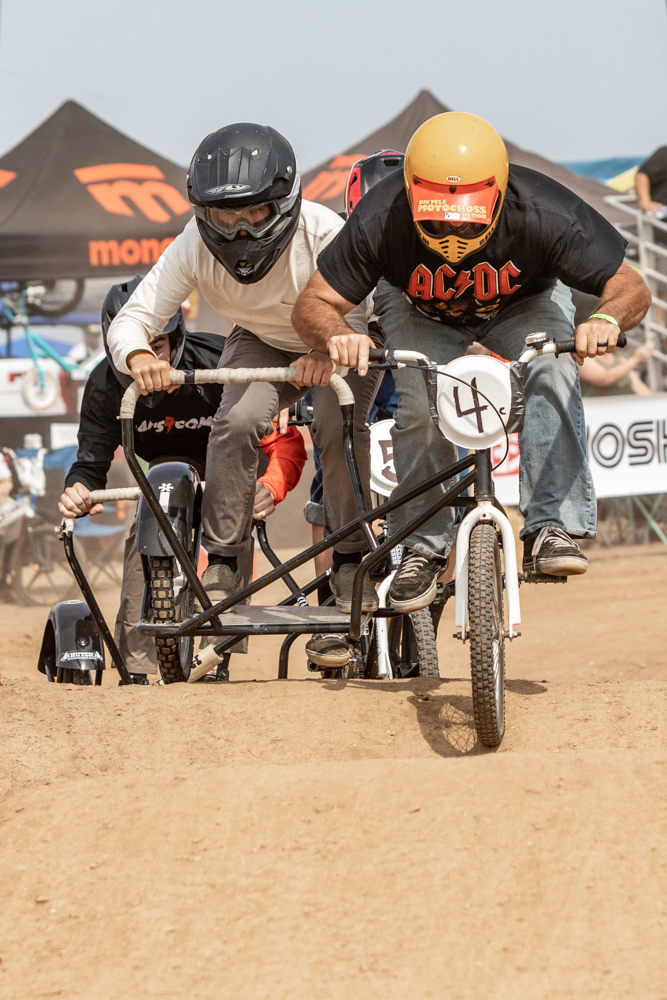 Yeah it was great to see! I can only think they were inspired by what we did the year before which has to make you feel good right! I couldn’t tell cause I don’t speak French, but it sure looked like everyone was having fun, not taking it too seriously which is what it should all be about. Look from our TV and video work in the motorcycle world, nostalgia is popular. People want to think about, be part of at least for a weekend when times were simpler, maybe the best years of their lives and if BMX part of it, then here we are doing this now.

Knowing you on how you operate.  Your mind must already be ticking on how this is going to continue to build moving forward?  Any insight you can share on the future of Frogtown?

For sure, I was and others were taking notes all weekend for the future. I want us to really hone in the operations of the event to make it run smoother, get more volunteers to help everyone work less, enjoy more, etc. That takes local folks, more sponsors, etc. We’d like to see the moto/rider count increase and we think it will. More expo exhibitors even talk of a vintage dirt jumping venue on the back side of “the hill”.
Just continue building the festival aspect of the event for the industry and local community where this event becomes a staple of the calendar for everyone knowing that a weekend in September every year they can count on being in Angels Camp, AKA… Frogtown.