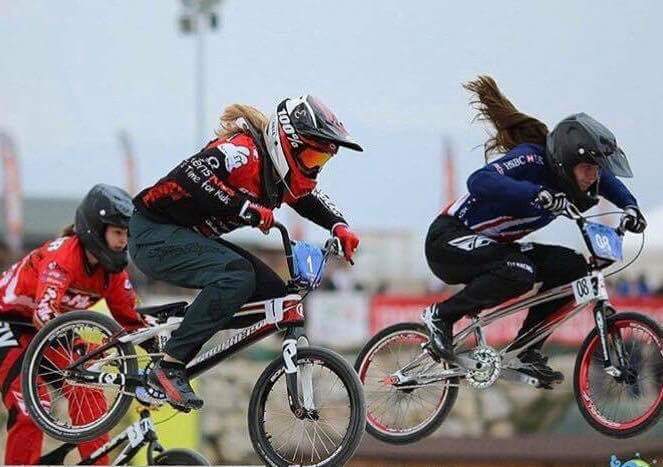 What titles have you won so far?
I have won 3 x British National Championships, all racing in the double age groups, we race 2 age groups of girls together in the UK to get more competitive racing. 1 x British title, 3 World Finals in Belgium, Columbia and last year in the USA. 4 x European Finals.

You’re the youngest girl to send the 8m SX hill in Manchester, how old were you and how did it feel?
I had just turned 13, so I’m the youngest to jump the Manchester 8m. I know my friend Ruby Huisman also jumped an 8m hill in Holland at 13 as well, so it’s Ruby and I.

Are you looking forward to racing at the SX tracks?
Yes, I am. I love big hills and big tracks as they work to my strengths.

You’re only 14 but you’re racing Championship Women in the UK. How’s your season going so far?
It’s going well. I had a slow start to the season and the Leicster National has been cancelled so I’ve mainly been concentrating on the European races and trying to get a good ranking in the 15-16 girls. My aim is to make as many Euro finals as possible and finish top 5, as it’s a tough category.

You’re on the British Cycling Jr. Academy, how long have you been on the program and how has it helped you?
I’ve been on it since I was 13.  I’m the youngest on the program at the moment and the support from British Cycling is excellent. The coaches and the team riders all really help each other improve. We also get to go on training camps at different tracks around Europe, as well as attending races in the UK and Europe together, and having Marcus there at the races (team coach) helps a lot.

Tell us about your race in Holland this past weekend, racing the World Champion and winning?
It felt really good especially after having a tough semi final, and ending up with an outside gate for the main. It’s always tough racing against Nadine Aeberhard.

Do you prefer racing at home in the UK or in Europe and where have you raced this year and what races have you got coming up?
I prefer Europe as the atmosphere at the races is great and the competition is always tough. This year, I’ve raced at Manchester indoor, Verona in Italy, Kampen in Holland and I’m going to Blegny in Belgium in two weeks, then it’s off to Bakoo for the Worlds.

What rider do you admire the most and who has been your biggest influence in the sport so far?
I’d say Mariana Pajon, winning 2 x Olympics Gold medals is not easy.

And finally, what are your future goals in BMX?
My aim is to go to the Olympics and race in America full-time.