How’s the Show going and for the non-listeners how can they tune in and listen?

The show is going great!  Each week we grow a little more, find out flow, and hopefully keep the internet working, haha.  It’s a work-in-progress but overall really fun to see the response we get from the public.  Right now, you can find us on our weekly, Monday night Facebook live show at 6pm PST on the @CafeWilloughby page.  I also upload it to youtube @Cafewilloughby and would love to eventually add a podcast to that list as well.  Dale, any tips on how to set something like that up?  I know your podcast kills it!

What gave you the idea to put on an event?

We all know there are problems within the industry currently.  Sam and myself kept throwing out ideas on the show each week.  Those ides led us to putting an event of our own together.  I personally have a lot of passion for this sport, and know with some small changes there can be some drastic results.  Instead of telling people what to do, or complain about what should be done, I put it out there for the world to see.  It started off as a small thing, and we quickly shifted gears into making it a big production.  It is one of those things of “putting our money where our mouth is”. We claim there are things that can be done, now is the time to show it off and make it happen!

You’ve got some great sponsors and prize money for the event.  How much is up for grabs and who are some of the sponsors onboard?

We are really fortunate to have the support of our industry.  We didn’t even have to go too far outside the industry to get the support needed.  Something that can be done, and if more of this happens it will be done, but it was great to see everyone jump on board for an event like this to help make something “cool”.  We currently have a guaranteed purse of over $5,000 plus 100% payback on entry fees, and we are giving the pros half of the daily ticket sales.  This is part of our agreement with the riders.  We have our top guys, and the bigger the event gets, the more money that goes home in their pockets!  I would say all in, we will have over $6,000 to hand out Monday, Nov 6th.  As for supporters, Fly Racing is our title sponsor followed by Box BMX, Broski Sound, Pro Tracks, Answer, Ssquared, Promax Components, Broken Yolk (local breakfast spot), Twisted BMX, SCR, Ryno Power, Pure Bike Co, and Full Tilt BMX!

It’s looking like the event is going to be a success.  Any vision of more events in the works?

Let’s hope it is a success!  Right now, we have hyped it up a bunch, now let’s all just hope I can pull it off, haha!  I would love to do more events in the future.  My goal with this is to come up with a formula for success.  Something that works and there is a good ROI for all involved.  Once we have that formula then it is really about just putting it into play.  I can tell you now that there are some talks of future events, already!  It would be great to have a 5-event series, maybe not all first straight only like this is, but a cool, 5-stop series that has different stuff involved, markets the pros the way they need to be, and really makes an event out of this rather than just another race.

All the big names are signed up except Olympic Champ, Connor Fields.  Is he “cool guying” the event or was his request fee to show up too high?

Yea man we just didn’t have enough to pay the champ to come out, hahaha!  No, I actually reached out to Connor, he was super cool about it and loves the idea about the event, but he’s currently in school right now.  He has a test on that same Monday, it’s something he can’t move. He said he would love to be a part of something in the future but timing was off.  My wife is currently in school, so I feel his pain and will cut him some slack!  Next one, he had better be at though, haha!

We all love a good Pro debate and specifically what they are or are not doing to grow the sport and show value. Who are some of the guys that are doing a good job out in the race World?

If I had to pick one dude I would say Anthony Dean.  The dude is a hard worker and has some good ideas.  I think he just now needs to stay healthy and race a bit more, but he has some really cool projects he’s working on.  Stay-tuned to what he has coming out in the next month or so, great ideas!  I do agree, though, a lot of these guys are missing the boat through this race.  I can say right now, the whole low-payout thing is 100% a two-way street.  All the blame can’t be put directly onto USA BMX/ UCI

You also do a great job on Social Media and in the trenches promoting the sport on a daily basis. What do you say to the Facebook/Social Media warriors complaining constantly about the sport?

Thanks, Dale.  I do what I can!  URGGGG the complainers annoy the crap out of me!  Just shut up and do something about it!  It’s easy to complain, it’s lazy to complain.  If there is something broken it will always remain broken until someone fixes it!  How about next time the complainers see something, try to find 3 positives before you tell the world what is wrong with it.  After you tell the world how bad it is, at least provide a working solution to support why you think it’s broke!

If you could hijack one of the Pros IG’s and give them some help with their posts, who would it be?

That is easy, and the dude is one of my best friends, Sam! Haha, he needs a big time social media 101!

Who do you have on the podium for next week?

Oh man, that is going to be a hard one.  We honestly have a group that would open it for anyone to win.  I would say Joris, Anthony, and Nic.  Not in any specific order.  I will say, though, if Tory rides aggressive he could make something happen.  And, Sean Gaian is my dark horse.  The kid has been going faster than I have ever seen him go recently!

In closing, anything else to add?

Make sure you are at Chula Vista BMX on Nov 6th to see who has the fastest first-straight in BMX!  If you can’t be there in-person make sure to tune in live on the @CafeWilloughby Facebook page.  Gates open at 5pm, and the show starts at 6pm! It is going to be a great night of BMX!  We have DJ Johnny Johnson keeping the party going, Better Buzzed will be there with free coffee to keep everyone’s energy on high and it’s going to be an event like we haven’t seen in BMX before!  Thanks, Dale and see you then! 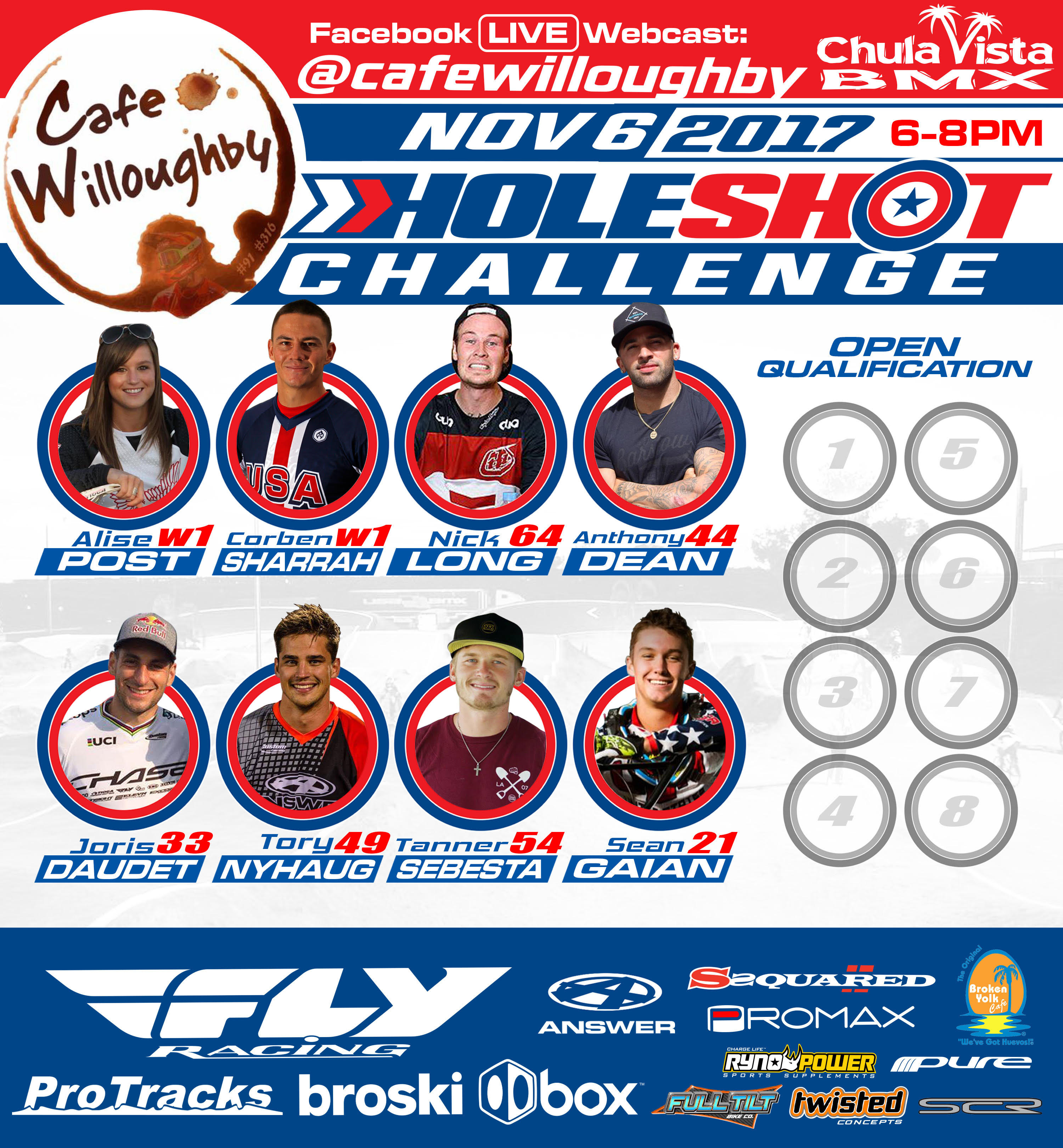