8 meter hill or not?

We asked a number of riders and industry insiders the simple question – 8 meter hill? Or, time for a change? 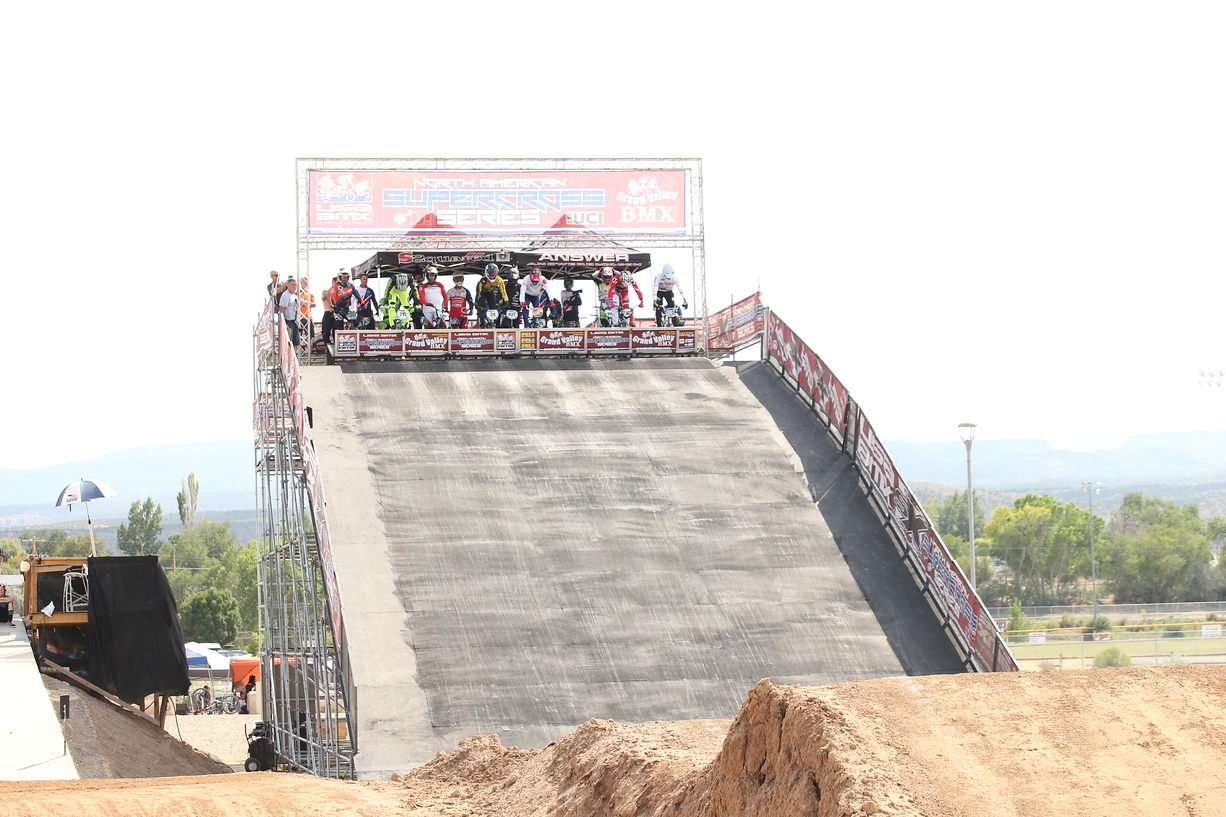 Rich Eames (UK & Olympic Announcer)
The hardest question to answer! 8m makes us look “media friendly” but the risk vs. reward for riders doesn’t stack up, at all. That said, the 2015 World’s off the small hill was the best World’s for a long time. I’m hearing that the 8m hill won’t be an issue after Tokyo anyway! If that happens, we can do what the hell we want, no one will give a shit anyway!

Tre Whyte
Ooh, this is a hard one! I feel that the normal sized hill makes it easy for riders to feel more comfortable/confident and that makes racing better and more exciting to watch! Also, I feel the small track highlights the raw basics of BMX, which we all need! On the other hand, SX can be really exciting when the track is sensible and actually good to race and if that’s the Olympic standard it’s going to keep us all racing so I really don’t know where I stand! I think if I had to choose I’d prefer a good mixture!

Jeff Upshaw
My thoughts on the 8 meter Hill are pretty simple. It’s enjoyable to race on this style starting hill. With the sport being on an all-time high when it comes to skill level and technique. The Supercross 8 meter hill adds a new technique to the sport. I think it makes the pros and upcoming riders stand out to your average eye.  High speeds mean the wrecks can be more of a severe injury, which brings me to my next point. Tracks with 8 meter starting hills should have a regulation for the obstacles on the first straight, optional jumps for different skill sets.  Jumps you can jump, or even pump for your current skill set with the idea of jumping or manually being a faster route. I think the hills should stay with some adjustments to the first straight away jump and the prize money.

Johnathan Hearn (2024 Magazine)
8m hills and SX tracks are just boring. Tracks are all the same… same jumps, same layout… and when asked a couple of years ago many to big names they claimed they were bored too. I’m sure when the UCI announced last year (that WC races now didn’t need a big hill) if it wasn’t for recent investments in facilities would they have sacked of the big hill all together. Is the big hill only exiting for the youth (14/15/16 year) learning it and the first jump… and maybe the spectators who haven’t seen much BMX/SX. I feel that the lack of difference in track layouts is a bigger concern.

David Graf
8 meter hill, yes! I think it’s okay to have different hills. But for the big races such as Worlds, Euros and Olympics it’s 8m for me! It’s impressive to see for spectators.
Crashes are not due to the hill, it’s when the first obstacles are a badly built. It is physically really hard to prepare. All of these old-school guys that say, “no pull needed”, should come try it. It’s so hard to switch from 0-240rpm in 2.5s. I think that is very interesting to train for.

If you want to have a small hill with lots of pedaling, go ride the track. In my eyes, our sport would not be as far as it is now, without the ramp! And, I do not see the hill change as a solution for BMX’s problems.

Trent Jones
Personally I see both sides to the story having the tall 8 meter hill with all the danger involved, or having a gate slapped on a 2 meter pile of dirt both to which show case BMX really well. That being said the 8 meter gives the public that initial “WOW” factor that something that extreme freestyle sports deliver and show case. Which companies such as Redbull enhance and sell to the public, drawing massive crowds and revenue all round. But then again people are also drawn to seeing the human body showcasing raw power and explosiveness at maximal effort. For example the 100 meter sprint in track & field. Arguably the most basic event in track & field, but also draws the largest crowds. Seeing theres no BS just 8 dudes giving it death start to finish. Or something closer to BMX also in the cycling world is Track Sprint. Where it’s also one of the most popular events in track cycling with some big dudes with big engines going at it for something as short as 200 meters or 3 laps. Hence I don’t see a direct right or wrong answer in which would make BMX better. As both 8meter and smaller start hills can be made appealing in aiding growth and interest in our sport.

But something around the product that we sell as “Professional BMX racing” needs to be better structured from the amateur side to overall make things more engaging for fans/public throughout a season. As it’s not due to a lack of attraction that our sport suffers. Olympic TV engagement proves that, seeing BMX is up there for a solo medal event. As I more see it as the structure between national and international sanctions where there is a major piece missing that causes Professional BMX to struggle. As us athletes prove we race regardless whether its a 12 hour day in the US on some bunky dirt track or a structured 3-5 hr time schedule on perfected multi-million dollar complex. Which having athletes compete in both scenarios is something you don’t see in many sports today. Which is also cool from a fans point of view.

As for me personally I’m a massive fan of the 5 meter start hills as its kind of the happy medium where there is speed but not in excess of danger. But also showcases more sprint and power down the front straight as it’s not just 8 cranks straight into 30-40 foot gaps with a pedal here and there. But overall my view of the 8 meter hill doesn’t act as the silver bullet for professional BMX in delivering it to the world. As I can see the pro’s and con’s from both sides but then again I wouldn’t be mad at all if they stopped racing on them tomorrow as I know which one hurts less when you go rubber side up!

Masahiro Sampei (Japanese National Coach)
It’s hard to say, I like the feeling going down the hill and it’s fun to jump the first straight but when it’s only by myself or practice time definitely need to change the first jump to be safer for girls. Always scary and risky to watch them jumping side by side, as they’re affected by just a tiny bit of head or side wind and I don’t think that hill and first jump make any changes to the game. Even small hills with small first jumps are still good to watch battles. On the other hand, it’s been over 10 years since we started using 8m and it’s becoming normal for little kids. This might be the standard for kids now. 10years old and they can handle it. Hard decision.

Hearing the riders talk about it, you become convinced pretty quick that the 8m hill is good for the stoke value of the athletes, and takes the level of “extreme” a notch higher than it would be with the same track, run off the 5m hill. From a practicality perspective, the 8m hill is a disaster. The expense to build one hill is enough to build three or four traditional tracks, in full. If you invest the money to build it, the hill may only be used in competition once or twice a year (with training sessions being run more frequently). At all the other times it is just a 26-foot-tall sign saying “KEEP OUT” to local families who might want to give BMX Racing a try with their 10-under in the back seat.

Elite BMX Racing is not connected to grassroots BMX Racing enough for that fact to be an actual consideration when deciding to build or not build an 8m hill. But make no mistake, “reverse curb-appeal” is absolutely a factor in driving new families away. The Zolder Worlds showed us that the action can be every-bit as awesome off the 5m hill as off the 8m. The ATHLETES, and their skills, are what makes BMX Supercross fun to watch. UCI regs now allow 5m hills to be considered, so the trend may be moving in that direction – but they can’t just drop the 8m hill; there are a couple dozen dotted around the world, built, at the UCI’s say-so, at great expense, so my guess is that it will be around for some time to come. Of course, the compromise would be to install stadium seating on the face of the 8M hill and make it a VIP experience, with a cafe/snack bar on the top.