Catching up with the almost new British Champion, Liam Batey 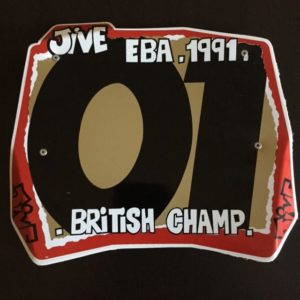 Give the readers that might not know you, a little background on your race history?

I’m Liam Batey, the younger brother of Kelvin Batey. We both started racing at a very young age and I won many national and British titles as a challenge rider. I turned Elite when I was 17 and was in the top 5 elite for many years. Podium places in Elite nationals, Pro opens and no clips races around 2004/2005/2006 got me noticed and was put on the British Cycling Program but that didn’t go so well — haha. This season was my 22nd season as a BMX racer but I’ve still been actively involved in the sport during my time off the bike in the last couple of years.

What’s the scoop on you being a professional poker player?

I have been playing poker since 2002. It started out as just a bit of fun but as I looked into it a lot further, I quickly learned that this was a game you could actually get better at. I studied hard at it and what was just a secondary income, turned into my main source of income and then my only source of income. I had a good stint in tournaments a few years ago, winning a World Series of Poker side event for $42,500 in 2013 and the first player to win back-to-back Grosvenor 25/25 series titles in 2015 for £16,000 combined.

Currently, I am now just an online cash game player on Sky Poker under the name ‘LB44’ and make a living that way.

I also trade sports betting on betfair and bet on football. I think I have a stats database on every professional team in Europe from 2016/17 and will start compiling this season’s in the next couple of months. Ready to make some money at the start of next year when my algorithm is in place.

You hadn’t raced for a few years and made the comeback to racing what brought you back?

I guess I just wanted to challenge myself physically and mentally. I kind of wanted to see what I was still capable of. Poker is a very anti-social lifestyle in terms of “the real world”. Our working hours are very late nights and you can forget to look after yourself. So around Christmas time 2016 I decided with the help of Kurt Pickard, to set out a plan to get me as fit as possible for the 2017 season and see what races I could do well in.

Ok let’s get to the scoop… You just won the British Championships last weekend only to find out going up to the podium you had been DQ’d? Give us the run down and your thoughts on it all?

I think there’s so much to explain in a single paragraph so I have done a short video with the last turn/finish straight action and my thoughts on how it went down. You can find it on my Facebook page. The video is pretty conclusive that it wasn’t a DQ and the guy who came 2nd should feel a bit embarrassed to claim my title if I’m honest. I just don’t think I could ever protest against a fellow rider no matter what happens in the race. We are all grown men at the end of the day and are racing BMX. I’m probably one of the cleanest riders out there so to get DQ’d for the first time in my 22 years in a British Championship final because a rider put his hand up at the finish line to complain is quite ridiculous.

Along with your brother, Kelvin, you have been around the UK BMX race scene longer than most. What are your thoughts on the sport today as it sits in the UK? Good and bad?

Yeah there’s only a handful of people who have been around for as long as me and my brother. Dale Holmes, Marco Dellisola, Scott Dick, Alan Hill, Matt Allen are some of the mid-school names that spring to mind. Even when I stopped racing, my girlfriend at the time was racing Elite women on the Supercross circuit so I was still heavily involved in bmx. I think on the whole, the Olympics has grown the sport in terms of number of riders at events. Worlds/euros/nationals are all up on participants. The UK scene hasn’t really changed much in terms of it still being a very unknown sport outside the walls of the cycling community and small group of people from within BMX still have a huge influence on how it’s run and I think they need to spread the power out a bit for it to grow. I don’t think that will ever change, unfortunately. Even in another 10 years, the format, officials and rules will all still be exactly the same.

Seems like there is starting to be some depth within Team GB’s Elite riders in the last few years, which is refreshing. Can we expect any International or World Cup wins in the next few years?

The future is certainly bright for GB internationally. On the women’s side you have Bethany Shriever and Blaine Davis who will be moving into elite next season and will compete for finals straight away and a number of younger up-and-coming riders like Elissa Bradford, Libby Smith, Ellie Featherstone and more who are pushing the limits. Fair play to the girls because mentally it’s a huge thing to be doing Manchester’s first-straight at such a young age. Much respect.

On the guy’s side, Kyle Evans is obviously the only established senior rider now with Tre Whyte in America improving and Quillan Isidore recovering from injury. I’m not sure why Curtis Manaton isn’t on the team, after the season he has had. Very strange. I think once Kyle and Paddy Sharrock have a couple more winters in the gym, they are going to be something special. I don’t think there are many riders who can hang with Kye Whyte for track speed. The kid is unreal.  Then you got the likes of Ryan Martin and Ross Cullen coming into Jr Men soon, which will be a huge indicator to see how they will progress. Hopefully, Ryan can get his knee sorted this winter and get his W1 plate back in Baku.

I think Marcus Bloomfield and Mark Seaman have done a brilliant job bringing them all through.

Haha, good question. I thought I left all the controversy back in 2009 but it seems to follow me wherever I go so at the moment I’m not too sure. Think I was the only rider who won Nationals this season, who didn’t have any sponsors so that can kind of “eat away” at your finances a bit. Poker has kind of been put on the back burner while I played around on these kid’s bikes, so need to start earning some wages again now.